The Gil Hibben line of throwing knives by United Cutlery is known for its one-piece stainless steel construction, beautiful minimalist designs, and high performance. The Gil Hibben Tanto knife is one of the mainstays of the line and is a solid piece of equipment.

With a 4.6/5 star rating on Amazon, the Gil Hibben Tanto Thrower is one of the best knives I have ever used. Without any major weaknesses, it delivers an all-around package that can be used by the most casual of throwers to the most hardcore competitors.

Let’s take a look at what makes the Tanto a great knife, whether it has any weaknesses, and how it compares against the Gil Hibben Competition Throwing Knife.

There’s not a lot much money in knife throwing, so IKTHOF is reader supported. This page may contain affiliate links so we get a small advertising fee for any purchases.

The Gil Hibben Tanto has a sleek presentation straight out of the box. The genuine leather sheath is nice to look at, although it does feel like it’s of low quality. Inside the beautiful leather sheath, you find three throwing knives.

Like all Gil Hibben knives with a similar finish, the shiny blade immediately stands out. If looks were all that mattered in a knife, Gil Hibben would be the only knife that anyone ever bought. However, that is not to say that these are not functional knives. On the contrary, they fit great in the hand, especially due to the trigger-grip design that makes up for the above-average weight.

The item model of my unit is GH5003-BRK. The knife has a signature embellishment of the designer, giving it an extremely premium feel. With only a single piece of 420 stainless steel used, the knife feels more like an expensive piece of jewelry than a potentially hazardous weapon.

How I Reviewed the Gil Hibben Tanto Thrower

The Gil Hibben Tanto Thrower triple knife set has actually been my main knife for about a year. While I am not an expert in knife throwing, I have tested the vast majority of knives available in the market at one point or another.

Having played with the knife for hours on end, I did not feel the need to extensively test it before writing the review. However, I did spend a small amount of time in my backyard with it, throwing it against multiple targets to compare it with the Competition Knife.

Due to its trigger grip, it is possible to use the throwing knife as a standard pocket knife as well. This is helped by the fact that the blade on the Tanto is one of the sharpest I have ever used in a throwing knife (this is both good and bad as I discuss later).

Of course, you shouldn’t expect it to cut an entire apple in half. However, I have used my Tanto to cut pieces of rope in a pinch, and it was serviceable.

The Best Knife for Knocking on Wood

Any decent knife can survive cardboard. However, few are able to survive extended throws on a wooden target. In a year or so I have been using the Tanto, the stainless steel blade has only broken once, which is more than acceptable.

Sure, the knife is expensive to replace relative to most other throwers on the market. However, I have found the longevity of the product to more than make up for it. 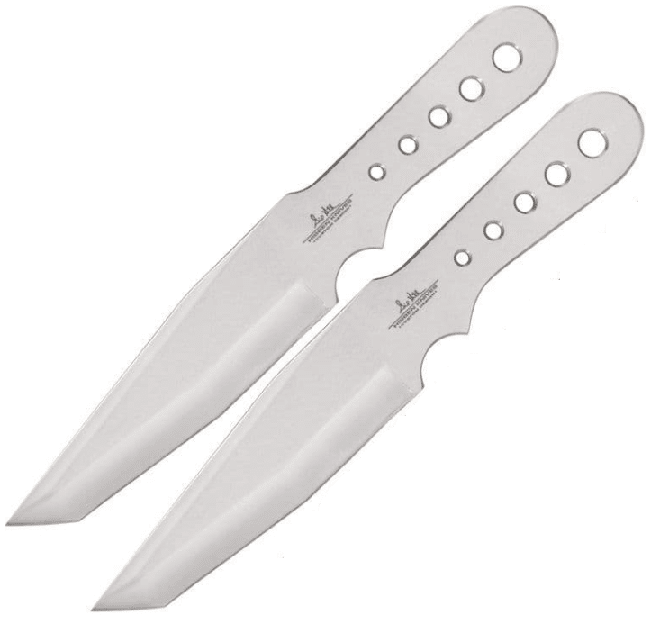 From Beginner to Expert, the Tanto Just Works

It is extremely easy to use the Tanto. Despite being a knife for the enthusiast, even a beginner can quickly adjust to the ergonomics and throw reasonably well with it.

Just remember that the knife is a little heavy for its size. However, this can be a great strength-building exercise for novice throwers. Once you manage to nail long-range targets with the Tanto, you will have no trouble doing it with smaller and lighter knives.

The Edges May Be Too Sharp

The easiest solution that I have found is to use sandpaper and dull the edges a little bit. However, make sure that you don’t dull the tip, as you need it to stick to the target. Also, if you do this, you will no longer be able to use the Tanto as a makeshift pocket knife.

There Are Reports of The Steel Rusting

Contrary to popular belief, stainless steel is not completely resistant to rust. If not taken care of, stains and rust will begin to appear. Some owners have had this happen with their Tanto, with one online review claiming that the knives arrived in this condition.

Most probably, this was due to poor handling by the owners. I have personally never had any problem with the 420 stainless steel on Gil Hibben knives. Even though it is made in China, it is still better than most others on the market. As long as you take care of it, this shouldn’t be a problem for you.

It’s never a good idea to leave a throwing knife sitting out in the rain. You don’t need to build a full display rack for them, but at least bring them back inside. One of the best knife throwers I know keeps theirs in an old shoebox.

Are Gil Hibben Knives Any Good?

Gil Hibben knives are considered to be some of the best in terms of quality, finishing, and aesthetics. Personally, Gil Hibben is my favorite throwing knife brand (I really like the way they look, and the experience of throwing them is great too).

All of the Gil Hibben knives that I have used have been good at one thing or the other, with the Tanto being my personal favorite.

When I first bought the Tanto, I thought that this was the perfect knife. However, I have used alternatives that are slightly better since then. The Competition Throwing Knife, also by Gil Hibben, is one such knife.

Still, I will continue to use the Tanto as my main knife. While the Competition Knife is objectively better, I just love the way Tanto feels in your hand. Still, you can’t go wrong with either one. If you have the cash, I suggest you buy them both. You may never need another knife again if you do!