The Magnum Bailey Bo-Kri knife, while not an extremely expensive throwing knife, is still a high-end piece of equipment, and it’s at a higher price point. It comes in multiple variants, all varying in size and design. However, all of them function in almost exactly the same way, a testament to Magnum Bailey’s craft.

The Magnum Bailey Bo-Kri knife is an amazing throwing knife set that should be good enough not only for backyard knife throwers but also for competitions. It has an Amazon star rating of 4.6 out of 5, and the company has a trust pilot rating of 3 out of 5 stars (not bad for a knife company, but not great). The knife was designed with competitive throwing in mind and should be the ideal knife for most people apart from the price-sensitive knife enthusiast.

The design is fantastic, and I can see a lot of collectors going for it, but there are some drawbacks that kept it out of our beginner-throwing knife roundup.

There’s not a lot much money in knife throwing, so IKTHOF is reader supported. This page may contain affiliate links so we get a small advertising fee for any purchases. 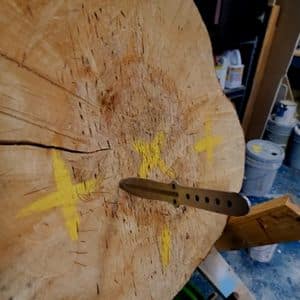 Opening the box, you get the genuine leather sheath and the actual knife. First things first, the Bo-Kri has one of the best sheaths I have ever seen. Most leather sheaths are made of low-quality leather and feel cheap, but not this one. In fact, I think this is one of the best throwing knife holsters out there.

The knives are no slouch, either. I tested all three variants and found the Magnum Bailey Mini Bo-Kri Knife to be my favorite. Although it is a little small at 6 inches, I found the other two variants to be a little too large for my comfort (the standard Bo-Kri is 10 3/4 inches, and the Ziel set is 13 1/4 inches).

Still, the stainless steel construction is impeccable, and the varying blade lengths mean that there is something for everyone. The single-piece construction, coupled with the shiny finish, makes this one of the best-looking knives on the market, although I find the design on the Ziel set to be a little over the top.

How I Reviewed the Magnum Bailey Bo-Kri Throwing Knife

I initially bought all three variants of the Bo-Kri throwing knife to do an individual review of each. However, after testing each of them for multiple days, I realized they are all pretty similar.

Of course, each of the individual knives handles quite differently, and the speed at which you can throw them differs due to the different weights. However, I found all of them to perform similarly in regard to their versatility and performance. And since the ergonomics of even the larger knives are equally as good in their category, reviewing them together makes more sense.

Usable Straight Out of the Box 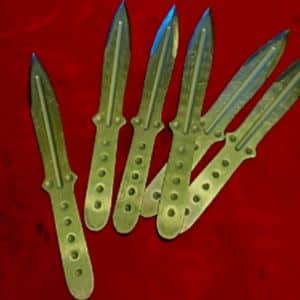 One of my chief complaints with some of the knives on the lower end has been that they require a few modifications in order to work properly. Whether that be a cord grip or sharpening the edge, it can a few minutes of work before they can be used properly. With the Magnum Bailey Bo-Kri, that is not a problem.

The knife functions perfectly straight out of the box, and it takes only a few minutes to get used to throwing the knife.

The knife uses a mid-range 420J2 stainless steel, not the best quality but still more than good enough for a throwing knife. The great thing about 420J2 is that the finishing can be very aesthetically pleasing, making the knife stand out among its peers.

As for durability, none of the three sets broke during my testing. It is possible to break any throwing knife if you throw it improperly, so beginners, beware. However, anyone with a bit of knife-throwing experience should not have a problem with durability.

The Sheath Can be Used in Multiple Ways

The leather sheath is not only of the highest quality, but it is also very versatile. It comes with straps that allow you to attach it to your leg. Of course, it can also be attached to your belt like a normal sheath.

It is not possible to sing enough praises about the sheath. It makes buying the knife for the sheath alone a justifiable purchase.

The Handle Has a Sharp Edge

This was only a minor inconvenience, but still enough to be a problem. Also, this does not exist in the Ziel set but only in the standard and the mini variant. The handle has an edge sticking out of the corner, and it can be a hindrance when you are trying to grip the knife from the handle.

If you are someone that usually holds the knife from the blade, then it won’t be a major problem, but it is something to keep in mind.

Not a Beginner Friendly Knife

On top of that, being accurate with this knife at long ranges can be a problem, once again, due to the heavier weight. Also, breaking this knife by throwing it incorrectly will be incredibly costly. As such, beginners may want to look for a better option.

Magnum Bailey, however, is a premium brand of the company. As such, its knives are usually of good quality. Magnum Bailey is a great choice if you are an intermediate knife thrower looking for a step up or an expert looking for a good knife to have fun with.

The Sure Flight throwing knife is a much cheaper knife and is prone to breaking easily. As such, it cannot compete with the Bo-Kri. Even if you are short on cash, there are better knives, such as the Smith & Wesson Bullseye.

The best thing would be for you to save up for the Magnum Bailey Bo-Kri, as it is more than worth it. Not to mention the leather sheath looks slick and draws attention like no other.

The Perfect Point PAK-712-12 is a much better knife than the Sure Flight. As such, there is a case to be made for it over the Bo-Kri.

Since it is a lot cheaper, it is the better option if you are on a tight budget. On top of that, beginners would be much better suited to the Perfect Point, as it is a lot easier to learn. Overall, there is no doubt that the Magnum Bailey is the better knife, but you should pick between the two according to your needs.